Getting from Bangkok to Kanchanaburi by bus shouldn’t be that difficult. That is if you’re prepared and know what you’re doing. I didn’t and I wasted a lot of time and energy finding the right bus. Here’s what happened and how you can avoid all the fuss and stress.

I spent a few days in Khanom and then decided to head north. I was told that Kanchanaburi is a good place to visit in June, so I wanted to give it a go. It seemed like getting there from the capital wasn’t that difficult. I read a couple of articles and headed to Bangkok, where I was hoping to catch a bus to Kanchanaburi.

The internet claimed that the easiest was to take a minivan, but after riding on one from Khanom to the airport I was convinced that I will never EVER take one again in my life. I don’t want to bore you with details, but let’s just say that the 2,5-hour ride from Khanom was a very thought-provoking one. My whole life flashed in front of my eyes and I was almost sure I was going to die. After that, there were no minivans for me, only big buses, which might not be any safer, but at least you have a better chance of survival and drivers are not as crazy.

The best way to buy a ticket from Bangkok to Kanchanaburi

I normally book my transport with 12GoAsia, which is my reliable resource when it comes to overland travel. I used them before when going from Chiang Mai to Laos. I wanted to book the tickets again, but this time it was a little bit too late and there was nothing available. I was hoping that once I get to the station I will be able to buy the ticket there.

If you like to plan at least with a few days ahead, then I highly recommend 12GoAsia as the booking system is very quick, safe and reliable. Most of the time you book the ticket online and then pick it up in one of the tourist agencies near your hotel, or near the station. It’s easy and convenient and you’re saving yourself so much hassle!

From Bangkok to Kanchanaburi by bus

I took a taxi from Bangkok to Mochit Bus Station. The ride took quite a while as the driver got lost and we had to turn around, but it should take you around 30 minutes without any traffic jams.

I was dropped off at the station, in front of a big, concrete building, which seemed to be a shopping mall, and headed in the direction showed to me by a security guard. I turned around the corner and was met with noise, chaos, and fumes from big, old buses that were everywhere. I walked along the pathway and was stopped a million times by people trying to sell me minivan tickets to Kanchanaburi. I kindly refused and asked for big buses. After a couple of conversations and convincing people that I really, really didn’t want to go on a minivan, I was sent inside the shopping center, to the 5th floor.

Among stalls with mobile phones and charges, I found a long line of cash registers where very bored ladies sold tickets to various destinations. I went from one point to another trying to find the one to Kanchanaburi and after a couple of minutes decided to go downstairs again.

I stopped another minivan driver and again, he sent me upstairs. I was determined, so decided to go through that neverending row of cash registers again.

I finally found it – at the very back of the whole floor. A lonely ladyboy sitting behind the desk handed me a leaflet with tourist attractions in Kanchanaburi before I could even say anything. She pointed to the stairs and said I should go to the stop number 5. So, I did just that.

When I got to the stand number 5 located outside, at the back of the building, there were a few buses parked and a couple of people waiting on benches. I sat down, too. Long minutes passed. I was thirsty, hungry and tired. None of the buses moved, none of the people sitting next to me seemed to be going anywhere either. Finally, a driver appeared and asked him if he was going to Kanchanaburi. Negative. He was going in the opposite direction, but he pointed at the other side of the street, where I could see a long line of people and a small desk. I went there.

The desk had a sign cut out of a carton box. Kanchanaburi – it said with big, bold letters scribbled with a pen. A lady and her toothless partner sat behind it looking bored and very tired. They sold me the ticket for around 150 Baht. I had 15 minutes until the departure! I was saved!!

The bus was dirty and stank with urine, but it had air con and soft seats. I was also given some water. I was the happiest girl ever!

The trip took quite a while. I can’t remember how long exactly, but we stopped every couple of minutes and there was quite a traffic. My Google Maps didn’t work, I didn’t have any credit on my phone and I had no idea where I was. Bangkok to Kanchanaburi by bus was supposed to be a nice and pleasant ride, but once I got to my bungalow I wanted to sleep forever.

From Bangkok to Kanchanaburi by bus – Useful Information

Where to stay in Kanchanaburi?

Bamboo House Resort – one of the cheapest and the most charming places I stayed in. I chose a bungalow on a raft, which cost me only 3 Euros per night. The conditions were simple, but I really liked it. The resort also offers more luxuries options.

Sky Resort – good location, clean rooms, and pleasant service. There’s even a swimming pool on the site. A very good place to stay while in Kanchanaburi.

Princess River Kwai Hotel – this place is a little out of town and there are a few facilities around. However, it’s a perfect place if you want to chill and relax.

VN Guesthouse – beautiful views over the River Kwai. Rooms have private bathrooms and wi-fi. The location is also very good.

Previous Post: « Help the world and your career: Venture With Impact
Next Post: Death Railway and Hellfire Pass in Kanchanaburi: Know before you go » 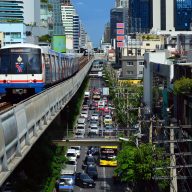 BTS in Bangkok: See the city thanks to Skytrain