1. We were told that the bus we were going to take would be one of those big, flashy ones that stood outside of the bus station (well, we weren’t actually told. I asked, the lady behind the counter nodded and waved us off). Instead the bus was a local one that was loud, stinky and dirty. There were less seats than passengers.

2. It was Tet, so people were carrying big orange trees, huge celeries, there was a cage with chickens, one guy had a big, live rooster on his arm.

4. People were shouting at each other and swapped seats all the time. They were also harking into small plastic bags.

5. No one spoke English. We stopped at a petrol station. I asked a young boy where the toilet was and I was met with a blank stare.

6. We stopped almost every 45 minutes or so. I read somewhere that it’s a Vietnamese tradition for the driver to do business on the way and that’s why they stop so often.

7. The toilets were the dirtiest ever. Burmese toilets were better. It turned out that the cubicles were only for number 2, number 1 was done outside, next to sinks, or in the middle of the toilet, with two feet on bricks.

9. We arrived at the central station in Hanoi. My sister and I were the only ones left in the bus. The Vietnamese music was still blaring from the speakers. I felt like my head was going to explode. We asked the driver to let us out. He refused and showed us the parking – we understood that he wanted to park in a safe place before he could let us out. Parking the bus took him ages, so we forced open the door and jumped out. After 12 hours I couldn’t stand the music, the honking and the smell of the bus. I preferred to die in a parking lot, hit by a car than spend another minute in that stinky can!

10. It was one of the worst journeys ever, but also one that I will remember for a long, long time.

An easier and more convenient way to get to Hanoi from Dien Bien Phu is to fly. However, it won’t be as exciting!

What are you experiences of bus journeys in Vietnam? Don’t be shy! Leave a comment!

Previous Post: « Things to do in Dien Bien Phu
Next Post: Wat Arun: The most beautiful temple in Bangkok » 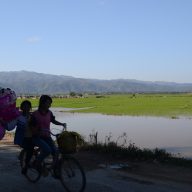 Trekking to the Kuang Xi Waterfall with the Tiger Trails