Vietnam is famous for its history. In the last century it resisted the occupying armies with amazing persistence. In many cities of Vietnam you will stumble upon museums exhibiting details of the past wars. Da Nang’s Ho Chi Minh and Zone 5 Military Museum is a tribute to the heroes of those conflicts and an interesting, although uninformative, place to see historical artefacts.

Outside of a grim, socialist – style, building sits a collection of tanks, artillery, missiles and fighter jets. This is probably the most exciting part of the museum and you can wander around the square taking some photos.

Large double doors lead to a hall where a natural size statue of Ho Chi Minh, also known here as Uncle Ho, is surrounded by stone sculptures of soldiers and pictures of their bereaved mothers.

Here you will also be greeted by a security guard. If there are other people visiting the museum you will be told to stick together and follow the same route – a very strange order, but one that everyone must follow.

The museum is full of photos, pictures, maps and artefacts. The exhibits start from ancient northern battles, go through French colonialism to the American War. It would be a great place not only for those interested in modern history, but anyone who wants to find out more about Vietnam if it wasn’t for the fact that there is almost no information to be found. Each room has a short introduction, but the displays carry little to none descriptive notes. It is a great shame.

The same goes to the other buildings of the museum’s complex. In a well manicured gardens, with a fish pond, stands a teak house. Again, there is no information on what it actually is. We admired the construction and were joking that we would really like a house like that one day. We failed to guess what the house was supposed to represent. After we got home I did some research and found out that it was a replica of Ho Chi Minh’s home built for Central Vietnamese people who wanted to visit him and couldn’t afford the trip to Hanoi.

The third building is dedicated to life and work of Uncle Ho. Here you will find a copy of his childhood bedrooms and prove of his many struggles and achievements. There are even his toothbrush, a comb, sandals and glasses proudly displayed behind glass. I must say, that out of everything I found in that building, his used toothbrush amused me the most.

Vietnam and its military fought long for independence. Whatever your views are on the political situation of the country, you have to admire determination and sacrifice with which people of Vietnam fought their enemies. Ho Chi Minh and Zone 5 Military Museum in Da Nang is a reminder of that history. Let’s just hope the administration of the buildings puts more information on their exhibits, so visiting tourists can find our more about past conflicts and the rich history of Vietnam.

Previous Post: « Cost of living in Da Nang
Next Post: 3 A Station: Hanging out with the cool kids » 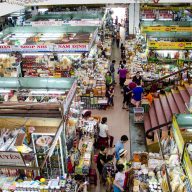 Han Market: The humming heart of the busy city