On the 13th of October at 15:52 local time King Bhumibol Adulyadej, the king of Thailand, passed away. The whole country has been mourning him since then. The famous Thai smile is a little less common nowadays, videos of crying crowds and pictures of people holding portraits of the King flood the internet.

Tourists, who have been planning to visit Thailand this year are wondering if they should cancel their trips and go somewhere else. It’s hard for them to imagine what the death of the King might mean for the tourism industry. I also waited a little with writing this article, so I can find out more.

Who was King Bhumibol Adulyadej?

King Bhumibol, also called Rama IX, was coronated in 1946. He was the longest reigning monarch in the world. He ruled for 70 years!

He was loved and adored in Thailand. His people call him the Father of the Nation and the King of Kings. As soon as you get to the airport in Bangkok you will notice pictures and portraits of the King hanging everywhere. The streets are full of them, every bar, restaurant and shop has one on the wall. This is how much Thai people love their King. At the moment people who are accused of offending the King and the Royal Family face up to 20 years in prison and some experienced bullying from upset mob.

King Bhumibol was the only Thai monarch who visited every province of the country. He listened to the people, he was interested in their problems and tried to help others. He created so called Royal Projects, which goal was to speed up the development of the country’s infrastructure and agriculture. I visited one of them – Nong Hoi Project – which helps the people from the north with farming vegetables and fruit. King Rama IX developed the country and thanks to him so many tourists visit Thailand every year.

King Bhumibol didn’t have much political power, but he intervened a few times. In 1992 he prevented civil war. He was a symbol of stabilisation.

Thailand in the time of mourning

The country will be in mourning for a year. For the first 30 days a few festivals and celebrations are cancelled. Loy Krathong – the festival of lights – will still go ahead, but without parades and festivities. Nothing is yet known regarding the New Year’s Eve celebrations this year.

The bars on Khaosan Road tuned down their music, but alcohol can be bought here without any problems. You can still enjoy a nice cocktail on one of the paradise beaches, but if you want to party from dusk to dawn in the next few weeks, it’s better to go to Cambodia.

Thais are wearing black or white at the moment and tourists are asked to wear something darker, too. Swimsuits are allowed on beaches and at swimming pools.

Some major attractions are closed. The Royal Palace will be closed until the 20th of October.

How to respect the time of mourning in Thailand?

Should you cancel your trip to Thailand?

Three years ago, totally unaware, I arrived in Thailand. I was going from the airport in Bangkok to my hotel and noticed a large number of soldiers with guns standing on every corner. I asked the driver about it, but he waived me off and said it was a Buddhist holiday and there were a lot of parades.

The next day I stumble upon one of those ‘parades’. I was so excited. People were shouting something, whistling with whistles and waving Thai flags, and there were noodles for free! After a few hours walking around I found out that this wasn’t a Buddhist holiday. These were political protests and international consulates were advising people avoiding crowded places.

After a while the military took over and soldiers were put on the streets in Chiang Mai. The martial law was introduced. The only thing that influenced our lives a bit was the curfew. Everything else was totally normal. People were still smiling, food was still good and the sun was always shining.

Thailand needs tourists and doesn’t want to scare them away. At least for the next 30 days or so the country will be a little quieter and a little calmer, so if you are not planning crazy parties and want to relax or do some sightseeing, don’t cancel your trip. Thailand is still awesome and nothing will change that.

Previous Post: « 8 reasons why you should become an Online English Teacher
Next Post: Lessons learned from living abroad » 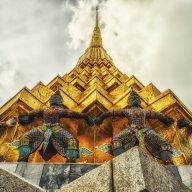 Useful Thai phrases for your trip to Thailand