I bought a ticket to Esfahan in my hostel in Teheran. I ate breakfast, packed my bags and was ready for my taxi, which was supposed to take me to the station. It was also ordered by the receptionist of my hostel.

A very cheerful driver talked to me in Farsi the whole way. Every few minutes he made sure that I didn’t speak the language. He was very disappointed when I confirm every time that, in fact, I knew only 2 words.

We sped through the crowded and hot streets of Teheran. The buildings were decorated with political murals and with the crowds of shoppers and the traffic everything looked like a scene from a movie about the Middle East. I had time to get to the station, so I was pretty relaxed sitting at the back and watching the streets.

Maybe it was because I was so distracted, I didn’t notice that we arrived at a train station, to the bus station. The driver took the money and drove off.

I walked into the station and realised where I was. Bloody hell! I had 35 minutes until the departure of my bus. I asked at the information desk and was informed that I had to leave the building and take another taxi. It should take me about 20 minutes to get to the bus station.

The problem wasn’t finding the taxi. The problem was the driver – an older gentlemen, who was very, very slow. Luckily, he turned out to be a very fast driver and we were speeding like a Shumacher’s bolid!

There was a huge chaos in front of the station. Some men took my luggage and told me to follow them. Inside a very modern hall with working air-conditioning was almost empty. Comparing to what was happing outside, it was pretty nice.

All signs were in Farsi, but I managed to find the right stand of the transport company I was supposed to use. I showed them the ticket and was told to sit down. I was all shaky from nerves.

I’m really fed up with travelling sometimes. In moments like that I really want to stay home and never leave it. At least in Lisbon I know everything and can use public transport without any problems. Suddenly, I felt sad. I missed home.

After around 15 minutes of sitting I started to get nervous again. From what I understood I would be called out when the bus arrives. I watched the staff in the little ticket kiosk, but they avoided the eye contact. At last, a bit worried, I turned to the girl sitting next to me. As it turned out, she was also going to Esfahan on the same bus. “Don’t worry. Buses in Iran are always late” – She assured me.

So, I waited patiently.

At last, they told us that we can go outside the building, where the bus to Esfahan was waiting. I took my suitcase and followed the girl I had talked to before. We went outside. There was no bus. My new friend stopped a man passing us by. He shrugged his shoulders. We looked at each other not knowing what to do. No one told us anything and didn’t point us in the right direction.

I got to Esfahan in one piece. The journey took 5 hours. I sat in a single seat, which was really comfortable, enjoying the views outside the window. Sometimes I’m really fed up with travelling, but only sometimes.

Previous Post: « My travel diary: True Iranian Feminists
Next Post: Esfahan: A city that will touch your heart » 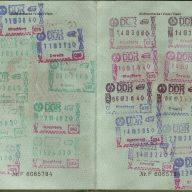 Visa to Iran: A quick way to sort it out before you travel

Travel Diary: In the city of Yazd