Koh Tao didn’t blow me away. It was nice, relaxing, but it was too expensive, there were too many western style pubs and bars and too many 25 year old American/Canadian tourists with huge egos, who spoke with a certain way, finishing every sentence with a question mark. All they were talking about was getting drunk on cheap booze.

The island was also a place where I have seen the most laid back locals ever. They sat in their little shops and cafes whole day and watched tourists passing by. Sometimes it seemed that even talking was an effort to them.

There was no rush in their movements, no stress was visible on their faces.
The westerners, who lived there, had exactly the same attitude. I experienced it the hard way when I was leaving the island.

My ferry was at 6 am. I was told to go down to the town and look for a taxi to the pier near 7-11. So, I go there at 5 and there are no cars, just two Italian guys drinking beer.

One looks like a typical tourist, the other like he’s been living on an island for years; he’s really tanned, unshaved, he’s wearing bermuda shorts, colourful shirt and a damaged straw hat. His name is Silvio and he calls himself the ‘taxi master’. He claims that there are no taxis at that time and there won’t be any and he’s trying to convince me that there’s no ferry at 6. Then we have a nice chat about where I’m going, where I’m from, why my English is so good. By the time we get to my love life it’s 5:15 and I’m sweating like a pig. He tells me to relax. So I do relax and keep discussing weather in Poland with him.

He tells me to give him 5 minutes and maybe he would take me to the pier. He needs to finish his beer first. 5 min later he still talks and asks questions. So I excuse myself and go back to the hostel, wake the receptionist up and tell him my taxi problem. He gets up, walks around the room, goes to the sink, washes his face, walks around some more, and comes back to me and says that if I want a taxi then he could order it for me. I ask him if he could give me a lift. He says yes.

He puts his shoes on, locks the door and walks with me. Then he turns back unlocks the door and calls his cat. ‘Sorry-he says-me not leave kitty inside alone’. Mind you, this happens in a very, very slow pace.

He takes my 60l backpack and my rucksack and me on his tiny scooter and we set off… where? Bloody 7-11 where he needs to have a quick chat with ‘the taxi master’. After he’s done, we continue to ride for another few meters. He stops and gets his mate to take me in his car for a bargain 300 Baht(!!). At this point I can’t be bothered to negotiate the price with them.

I made it to the ferry by the way. It took a lot of self-control to keep smiling through the whole thing and don’t lose my nerves! 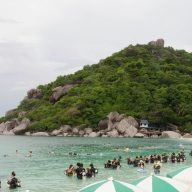 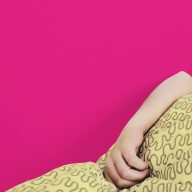 My First Negative Experience with Couchsurfing 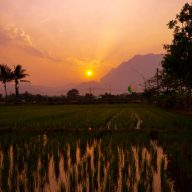 Songkran in Chiang Mai: All you have to know about the biggest festival in Thailand