I was slowly saying good bye to Iran. Those were wonderful 2 weeks, but I felt that I was missing something. I wanted to see more, I wanted to go further, stay longer. I realised that 14 days in Iran weren’t enough.

I spent my last day visiting the Polish cemetery in Teheran and doing some small shopping in the bazaar. It was June. The temperature was about 30-35 degrees. Sweat was dripping down my back and I was stubbornly walking through the streets.

I ate my last meal in Iran in a small bar, at a hostel where I stayed. I had been there on my first day, after I arrived. Three gentlemen that were serving me recognised me straight away. They smiled and served me a huge amount of rice, bread, Coke and yoghurt, which I really didn’t want, but they insisted on me eating it anyway.

I went back to the hostel a few hours before my departure. I sat down in the cafe and started a discussion with my friend – the feminist. We said good by hugging each other and wishing each other all the good luck for the future. It’s so wonderful that in this crowded, chaotic city I managed to find a friend.

The taxi driver who took me to the airport didn’t speak English very well, but he was so happy that he was driving me that he didn’t mind the language barrier. He held the steering wheel with one hand and with the other one he was taking selfies with me and showing me photos of his wife and daughter. We were driving so fast and I was a bit worried we were going to have an accident, but I still laughed along with him.

When we go to the airport, Hamid took out my suitcases and took a couple extra photos. He then sent them to me by Whatsapp. At the end he asked me to forward his number to other people, who might be interested in his services. Yes, Hamid drives like a crazy person (but who drives normally in Iran??), but he’s so nice and kind. I’m sure he will take you wherever you want to go. His number is: +98 912 318 4064.

The events of that day made me even more sure that Iran is a special country. Despite what the media says, the reality is so different. The kindness of people, the culture, the architecture, the history and the beauty of the desert and the cities will stay with me forever. This was a trip I will never forget. 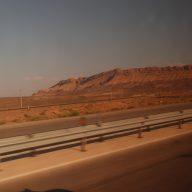 My travel diary: A bus to Esfahan