European Solidarity Centre is located next to the entrance to Gdańsk Shipyards – a historical place, where opposition to the Polish communist regime was born. This 5 storey building has exhibition rooms, a library, conference rooms and offices taken by various NGOs rent free. One of them is occupied by Lech Walesa – the former leader of Solidarność, the first Polish president elected in democratic elections and the Nobel Peace Prize winner.

Solidarność has a special place in Polish people’s hearts. It was the first independent trade union, created by the shipyard workers in Gdańsk. Thanks to their determination and bravery the communist government in 1980s agreed to give people more rights and freedoms, which finally led to the round table talks and establishing democratic Poland.

Outside of the gates of the museum you will find the Monument of the Fallen Shipyard Workers of 1970, which was elected just before Poland gained its democracy. It commemorates 42 people that were killed during Coastal cities events in December 1970.

Before you enter the courtyard of the Solidarity Centre, stop at the gate. This place was the main focus of the strikes of the shipyard workers. Until today people bring flowers and flags to place them on the gate to express gratitude to Lech Walesa and the Solidarity movement.

The building of the European Solidarity Centre was built to resemble one of the ships that used to be built here. The outside walls look like they are made out of metal and are covered with rust. You will also notice that the walls are tilted and give an impression that the walls are cracking.

The main purpose of the building is to show the history of Solidarność. Permanent exhibitions are spread over 2 floors and I wholeheartedly admit that they are the best ones I have come across from all of the museums I have visited so far. The museum is far from boring. 3D projections, films, touch screens and interactive exhibitions make you want to find out more about the events that took place.  Every room is spacious, light and allows visitors to freely move around without bumping into one another.

Hall A, hall B and hall C lead you through the history of Solidarność, from strikes that took place in Poland in 1970 through the birth of Solidarność to the first democratic elections in Poland. Allow yourself at least 3 hours for your visit. We spent 2 walking with our lovely guide Agnieszka, but we felt that it wasn’t enough. Every time we entered a new room there was something even more interesting and even more fascinating than in the previous one. My favourite part was a big Solidarność sign created with thousands of white and red post its. I also loved some of the interactive exhibits with historical pictures. But I think the biggest impression on me made a short movie of the strikes of 1970.

One of the rooms in the museum is dedicated to John Paul II, who gave people a lot of hope and motivation to fight the regime during the worst of times. The room is very bright with calm music playing. Some footages of the pope and other great leaders are shown on long screens that stretch along the room. There is nothing religious about this room and it has been created for those wanting to reflect on what they have found out during their visit.

On the roof top of the building you can chill out in a very cozy garden. During warmer days there are deck chairs for you to use. From here you can also admire the views over the Gdańsk Shipyard.

I was really impressed by the European Solidarity Centre. It is one of those museums that you won’t forget for a long time. It is not only about the fact that information is given to you in an interesting way, but the design of the building is so clean and modern that it makes you want to stay there for a long time.

The centre is open 7 days a week from 10 am to 7 pm from May to September and from 10am – 5pm from October to April. A ticket costs 17 Złotych and includes an audio guide, which is available in Polish, English, Spanish, Russian, German and French. 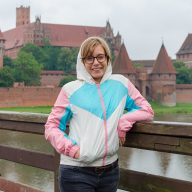 Malbork Castle: The largest castle in the world

Gniew Castle: A fun day out for the whole family

Previous Post: « Zakopane in a day: Enjoy the capital of the Polish mountains
Next Post: Amber Museum: Discover the treasures of the Baltic »

Malbork Castle: The largest castle in the world

Gniew Castle: A fun day out for the whole family