Transport in Lisbon is really diverse. You can take a subway, a tram or even a tuk-tuk. E-scooters have recently joined this list. The most popular are Lime scooters, which can be seen throughout the city and almost on every street.

I was skeptical at the beginning when they first appeared. I still do not like some aspects of them, which I will mention in a moment, but after trying them out I found out that it’s really a great way to get around the city. Additionally, using them you save the environment and don’t release any harmful chemicals to the atmosphere. 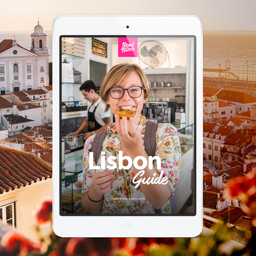 The essential guide for a trip to Lisbon. This handy ebook guide includes everything you need to know and see in Lisbon. Discover the best sights, restaurants, cafés and accommodation in the city. Make the most out of your trip! Find out more!

If you’re on a short holiday in Lisbon, exploring the city by an e-scooter will be a great adventure. There are many companies that offer these kinds of rides. I only drove Lime scooters, so in this post, I will focus mostly on them.

Advantages and disadvantages of e-scooters in Lisbon

Lime scooters appeared in Lisbon in 2017 and immediately won over the hearts of the residents and tourists. In a city where you go uphill and downhill, such help is extremely useful.

Lime already operates in almost 100 countries. They are the most popular in the United States but are also slowly developing in Europe.

The big advantage of Lime is that they are almost everywhere. If you have their application, you can be sure that at least one scooter will be available in the area. So you do not need to have more applications on your phone, you only need one.

In my opinion, scooters generally have 2 major disadvantages: they are expensive if you want to use them for a longer period of time and often pose a threat on the roads if they are used incorrectly.

Riding a Lime scooter in Lisbon – How does it work?

Using scooters is simple and pleasant. It does not require perfect physical condition or knowledge of technology, and in addition, it saves you time and makes visiting the city easier.

To use the Lime e-scooter in Lisbon, you need to download the app on your phone. You can do it through the Apple store or Google Play. At this stage, you will need to put your details and your credit card number.

Do not forget! You can use my code that will allow you to unlock the scooter free of charge. Download the application using the code: R2BJZFP

When you want to use the scooter, go to the app and search for the nearest scooter. The map will show you exactly where it is located.

To unlock it, all you need to do is scan the code that will shown in your application by putting it to a special reader on the steering wheel.

To start the ride, push away from the ground, put both legs on the scooter and press a special button that accelerates it. You can adjust the speed with this button. On the steering wheel you have a brake similar to the one that is on a bike. Do not forget to use it!

After finishing the ride, put the e-scooter in a place, where it will not disturb anyone and will not block the traffic. Now you can also mark the finished ride on the application.

The cost of renting a Lime scooter in Lisbon

Renting a Lime scooter is relatively cheap if you rent it for a shorter time. Longer trips can be expensive.

A single scooter unblocking costs 1 Euro, then you pay 15 Cents per minute.

If you want to save, use my code that will allow you one free unlocking: R2BJZFP.

Remember about your safety!

Finally, I would like to remind you of the very important security issues. When using a Lime scooter, remember:

That’s it! It’s as simple as that. I hope you will enjoy riding a Lime scooter in Lisbon. Let me know in the comments how it was!

Your practical guide to transportation in Lisbon

A walk to Christo Rei in Lisbon 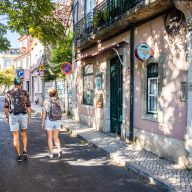 The best way to explore Lisbon?