I haven’t lived in Poland for a very long time. I don’t go to any protests and demonstrations. I don’t shout that I’m Polish and I’m so proud of it. I don’t even know when there is a national holiday in Poland. I’m not very patriotic, but whenever I have a chance, I visit places that are written in our history. That’s why I just couldn’t miss visiting the Polish cemetery in Teheran.

Who would have thought that there are Polish people buried in Iran? It was a total surprise for me. In the 1942 thousands of Polish people found themselves in the Middle East. They were released from the Siberian prison camps. This fact was never mentioned during the history lessons I had at school. It got lost among wars, battles, uprisings and dates, which you forget later anyway. Media forgot about this as well. They prefer to scare us instead educating us. All those people shouting racist slogans, or simply turning their backs on the tragedy of those that need our help don’t know about this either.

There are 1937 people buried here. 409 of them were soldiers. The rest were civilians. They all died from diseases and exhaustion.

When the Polish people arrived in Iran they were loaded on special trucks that took them to the refugee camps. Apparently, when driving through the cities and villages they were thrown at (literally) with food. Iranians threw fruits and cookies at them. There were places prepared for them all over the country. They also received medical aid, food and accommodation. Those that survived said that they were overwhelmed by the Iranian hospitality and only thanks to it they managed to stay alive.

Wikipedia informs that there were 115 000 Polish people in Iran, 13 000 were children. Polish language became something that you heard every day on the streets of Teheran. The Poles established their shops, restaurants, even newspaper and a radio station! A lot of women married Persians and stayed in Iran. Not so long ago the last Polish person died in Teheran. She came to Iran as a small girl and stayed forever. Helena Stelmach is also buried here.

It’s not that easy to get to the Polish cemetery in Teheran. First I had to take a metro, then change twice and then I tried to take a taxi, but catching one was a bit difficult. At last I found someone, who was willing to take me there. The driver was really nice and he even helped me to find the right entrance.

The gate was opened by Hamid, who looks after the Polish part of the cemetery. He is the third generation that works there. Before it was his grandfather, then his father, now it’s him and then next will be his son.

The Polish cemetery in Teheran is a part of a bigger area, where other nationalities are also buried – French, Italians, Russians, Bulgarians. The embassies of these countries look after the graves. The graves of Polish people are located just next to the French and Italian parts, which look very neglected.

I got lost among the graves and read the writings on the plates. I sat down on a bench. I felt sad. I thought about all those people dying on a foreign soil, in an unfamiliar country, not out of their own choice. I thought about hate and venom that can be seen on the internet forums and heard on Polish streets and wondered why so few people know about this place and the story behind it.

Where is this world going to?

Before I left, Hamid sat me down in a big armchair under a tree. He showed me books and leaflets that told the story of the people buried in the cemetery. He asked me if I wanted to eat lunch. He was taking a break and wanted to share his meal with me. I looked at his small, plastic container with rice and vegetables and declined politely.

At the end I signed the guest book and went through every single thing there was for me to read. I thanked Hamid for his hard work and left.

I’m not a huge patriot, but when you visit places like that your heart breaks in half.

Previous Post: « Shiraz: What to do when there’s no wine?
Next Post: Travel Diary: Saying good bye to Iran » 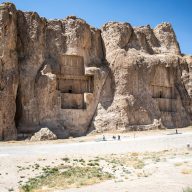 Between Yazd and Shiraz: A live history lesson