Dien Bien Phu might be a small town and not very well known, but it has a few attractions that are worth seeing, which might help you to get to know the culture and the history of Vietnam. Here is what to see and do in Dien Bien Phu.

I visited Dien Bien Phu in the winter. It was my first stop in Vietnam. At first I wasn’t really sure about the place. It was strange to say the least, but then it grew on me and today I look back at my visit there as at one of the best places I’ve been to.

If you don’t know where Dien Bien Phu is and why to come here, this section is for you.

Dien Bien Phu is a very important city in the history of Vietnam. This is where the French lost their final battle and Vietnam became a free country. This happened in 1954, but the story is very much alive in the hearts and souls of the Vientamese people and those who live here.
It’s a good idea to visit Dien Bien Phu as it will help you to understand the country better.

Where is Dien Bien Phu?

Dien Bien Phu is located in the north of Vietnam, near the border with Laos.

The best time to visit Dien Bien Phu is at the beginning of the year. It’s still cool here and the rice fields are very green.

You can fly here from a lot of cities, including Hanoi. Check out Skyscanner to find the best deal.

I went to Dien Bien Phu from Laos overland and it was an adventure. I recommend this way of travelling if you have time. You can find the best connections on 12GoAsia.

Remember that you need to obtain a visa before you go to Vietnam. You can also get a visa on arrival to Vietnam, which I recommend if you are planning to stay in the country for a couple of months.

If you have never been to Vientam, visiting Dien Bien Phu might be a bit overwhelming, but try to take it easy. Savour the atmosphere and visit all the attractions on foot.

Things to do in Dien Bien Phu

The city of Dien Bien Phu is not filled with attractions, but stop here for a bit and check these places out.

7 May 1954 is a significant date for Vietnam. On that day Vietnamese soldiers won the final battle with the French and gained their own independence.
The Museum is located in the centre of the town. Not many visitors come here, so you have all the space to enjoy it.
The exhibition starts with a life size Ho Chi Minh figure and a huge Vietnamese flag, which both make a great impression. Almost all of the artifacts have signs in French and English. There are photos, maps, and some curiosities, such as the French general’s bed or a bicycle, which was capable of carrying 330 kg of ordnance.
Visitors can also watch a short film about the battle.
Everything has a slight communist sound to it, but it is well worth a visit.

The cemetery of the Vietnamese soldiers, who died in the battle, is located opposite the Musuem. It isn’t very big, but it is one of the best preserved and looked after cemetery I have ever seen.
Each of the graves has burning incense, there is no rubbish lying around, the grass is short and well maintained. The centre point of the cemetery is a large monument, commemorating the battle.

This I found by a total coincidence. I was actually looking for bunkers, which are mentioned in the Lonely Planet. I didn’t find bunkers, but I found this:

To get there, you need to pass the bus station and continue towards the opposite direction, from the town centre. Turn right in one of the side streets and walk the unpaved road.

Dien Bien Phu is not very big, so walking around won’t take you long, but try to forget your maps and GPS and roam the little streets. The houses located away from the main road have a colonial character, with wooden shutters and small yards in the front.

Other attractions include: A1 hill – where the French defences used to be and Bunker Headquarters – the former French command bunker.

If you are interested in visiting the town, spend there at least 2 days and allow yourself time to suck in the very patriotic atmosphere.

In this section I’m going to give you some more information for your stay in Dien Bien Phu.

Dien Bien Phu doesn’t have a huge base of accommodation and it might be hard to find something if you don’t book in advance. Have a look at Booking.com before you go to find the best place to stay for your budget.

Where to eat and drink?

There are not many western style restaurants in the town. I only found one, which had a decent coffee and some snacks. You will need to put up with whatever is served in the traditional Vietnamese bars.
There is no night entertainment, so your evenings might consist of sitting in the hostel and sipping your beer there. There is at least one supermarket and a large food market.

I found Dien Bien Phu rather safe. The locals are really nice, but they don’t speak English. As a woman I had some unwanted attention, especially in a bar one day. If you are a female travelling solo, it’s best to avoid any places where you will find men only.
The streets are busy, as it is normal in Vientam. Mind the way when you cross the street.
There are no wester style restaurants in Dien Bien Phu and a lot of places seem like a risk to eat there, but it should be fine if you see a lot of Vientamese people eating in a place you want to go to.
And finally, don’t forget about your insurance. It’s crucial for travelling in South East Asia.

Previous Post: « Weird and wonderful Dien Bien Phu
Next Post: I’m a foreigner – get me out of here! A bus journey from Dien Bien Phu to Hanoi in 10 points » 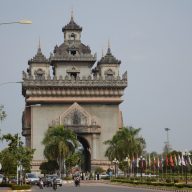 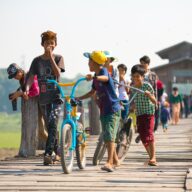 Getting overland from Laos to Vietnam 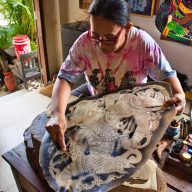 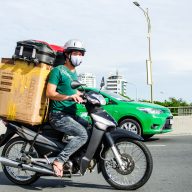 Rent and drive a scooter in Vietnam: Have a thrilling adventure