Disclaimer: This article is not meant to make you not to go to Kayan village. The people there live off tourism and when you go there, you support them. Below text is also my own opinion and is not meant to do harm to anyone. Go BUT respect the people and behave yourself. That’s all I’m asking.

There are attractions in Thailand that I would never want to see. These include so-called tiger kingdoms, where wild cats are drugged and forced to pose for photos with tourists, or places where elephants are trained to paint pictures or ride bicycles. I wouldn’t visit them because mass tourism is distasteful, but also because certain things make me feel guilty and sad. Long Neck Village is one of those attractions, too.

The essential guide for a trip to Chiang Mai. This handy ebook guide includes everything you need to know and see in Chiang Mai. Discover the best sights, restaurants, cafés and accommodation in the city and save money with exclusive discounts. Make the most out of your trip! Find out more

The Karen tribe, which is unofficially called the Long Neck tribe, came to Thailand from Burma, when escaping war and violence in their country. They are world famous for their women, who wear golden rings around their necks. From the time when they are 5 to their 21st birthday, each year one ring is added to their collection. At the end, their necks get so long that these women are often called “dragon ladies”, or just “long necks”. According to Karen people, the longer the neck the more beautiful the woman who wears them is.

When the Thai government officials saw these women on their doorstep, they felt it was going to be a great business opportunity for Thailand. They gave Karen visas and work permits, they leased them some land and took pretty photos of the women standing outside of their bamboo huts. Then, they used these photos in shiny, colourful brochures, advertising the northern region of Thailand and told the women to smile to tourists, who were willing to pay money to see something different and exotic. Long Necks’ villages became an attraction, a human zoo, where for 300 Baht you can take a photo with women dressed in colourful outfits, with a neck so long that her head looks almost like a poppy flower.

Karen are not allowed to leave their villages. Until very recently they weren’t allowed to go to school, or go to local doctors, or hospitals. Their situation is getting better slowly, but they are still kept in their little villages, without the permission to leave. If they want to stay in Thailand, they must stay on the land they were given.

The village I visited is located near Chiang Rai, around 3 hours from Chiang Mai. I got there by minivan. I had been asked to be a translator for a Polish group of tourists and I happily agreed, not knowing that the attractions we were going to visit weren’t on the top of my list.

The people on the tour had a choice: go to a market in Laos or visit the Long Necks. I was really hoping that they would choose the first option but instead, they preferred to see the “dragon ladies”.

The whole way I was thinking about it and trying to stay positive. The tour company was paying me for accompanying the Polish guests and they required me to be cheerful and pleasant, but I just couldn’t stop thinking about the fact that I was going to a place, which is commonly called a human zoo. After thinking about it, I decided that maybe it wasn’t all that bad. Karen had escaped violence and poverty. They found a haven in Thailand, they could live and feel safe thanks to tourism and money they earned from visitors. Besides, I had never been to a place like that, so I didn’t really know how it really was. “Cheer up…”, I told myself, “it will be ok”.

Long Neck Village is hidden between rice paddies and pineapple farms. When we got out of our van it was very quiet. Our Thai guide stopped us for a bit to tell us about customs and traditions of Long Necks.

The first golden ring a girl gets when she is 5 years old and then one ring is added until she’s 21. The women take them off only once a year for 3-4 hours. Their necks could break if the rings weren’t worn for longer than that. Taking off the hoops is a special ceremony and only women from the tribe can attend it.

Karen live only in the north of Thailand and in Burma. There are no other places in the world where one can see them. Originally they were farmers, but at the moment their main income comes from tourism. This fact made me feel better. If these people can live thanks to us, then there’s nothing wrong with visiting their village.

Before we entered the village, we went through a small market, where women from Akha and Lahu tribes sold their handicrafts. My tour, fascinated by the colourful outfits and exotic looks of the women, stared at them. Every now and then someone took a camera and snapped a photo of the ladies. This was the first moment I felt like I was cringing inside. I remembered a situation in Krakow when I had wanted to take a photo of a woman at a flea market and I had been shouted at because she hadn’t wished to be in a picture. This had happened a few more times in Europe and there I was, with a tour from Poland that took photos of people without their permission.

The entrance to the village costs 300 Baht – a bit overpriced, in my opinion. As it turned out, the village was one big market, where you could buy a couple of things made by the women, but mostly there were just things produced in China and sold in Thailand everywhere you go.

Our Thai guide encouraged us to look inside the houses. “Here you can see how they live. Please, go and have a look”, she said and pointed a small hut behind the stalls. I had been to a traditional Hmong village once, where you could see a house and even stay there for a night, but I was actually invited by people who lived there. Of course, I had to leave some money, but the owners of the hut were present all the time and they wanted me to come inside.

I stood at the edge of the market and waited for the tour to finish sightseeing.

At every single stall, there was a colourfully dressed woman with shiny rings around her neck. They were all knitting and weaving and didn’t mind us at all. My tour walked into the stalls, looked at the materials and took photos. I watched them from a distance. Our guide asked a woman with the longest neck to walk outside of her stall so people could take photos of her. They took group pictures and selfies. The woman giggled nervously and it was obvious that she found the whole situation a little awkward, especially when one of the tour members put an arm around her to take a selfie.

“Maybe you could ask her first if she wanted a photo with you?”, I suggested. A few people nodded, a few others shrugged their shoulders. “I paid for this”, someone mumbled.

The guide gathered us in one point. “This is how they sleep”, she said, taking out a photograph of 3 women sleeping on a side in one bed. “And this is how they look like when they don’t have the rings on” – another photograph.

“And how do they have sex?”, asked one of the people on the tour. I wanted to translate it, but knowing how awkward Thais can be when it comes to things like that, I changed the question slightly. The guide giggled and covered her mouth with her hand, which is always a sign of embarrassment. She just repeated the information before, that the women get married when they are very young.

I couldn’t help but feel that I was really in a human zoo.

The bad impression that this place made on me stayed with me for a long time. I wonder if there are many tours like ours that visit the village? How do these women feel when people take photos of them? Don’t they find it disturbing that strangers look into their huts? I am trying to rationalise this. Karen escaped the war in their country and now they can live in peace and it’s good that they can earn money, but does that mean they are happy with what they have? Is this an excuse for people to use them as some exotic artefact and stick lenses into their faces?

So, I have one request: If you really have to visit places like this, please respect others. There is nothing that can justify treating people like they are mere curiosities, not even 300 Baht entrance fee.

The pictures above are not mine. I felt too awkward taking pictures there. 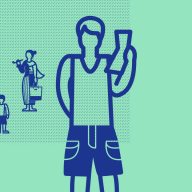 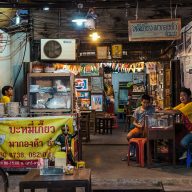 Lamphun and Lampang: Two destinations off the beaten path in Thailand